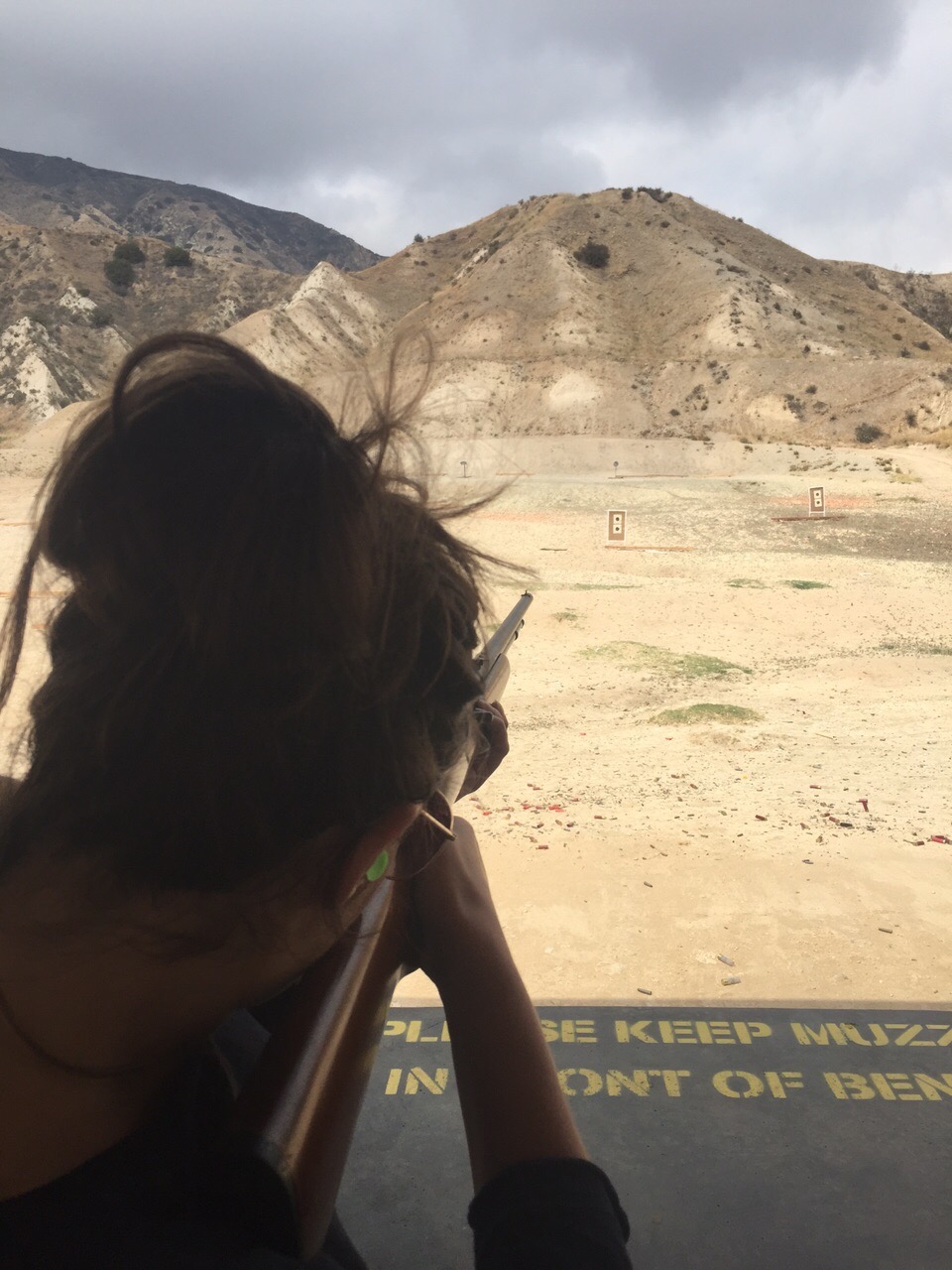 Today I’m going to go shoot a vintage rifle. It’s a beautiful old thing with a deep mahogany coloured wooden stock. It reminds me of the one in the pictures of Bonnie pointing it at Clyde i’ve seen over in Dallas.

My friend and I drive out into the deserty mountains to the Angeles Crest shooting range. It’s a public outdoor range where you take your own weapons, and The LAPD SWAT practice there on Thursdays.

We park up and it’s loud. I’ve been excited about this all morning, but as we get out the car the sounds of bullets firing through the wind scares me.

I panic a little bit and I don’t want to go in. Every time a shot fires I flinch. I have to sign a waiver which says I understand that just by being here I might actually get shot and die. Brilliant.

We collect our ammo and targets as well as our earplugs which helps a little with the noise.

I get shown how to hold the rifle for firing, how to load, unload, and flick the safety.

We start with metal targets which dangle at at a distance from wooden beams. I line up the iron sights in absence of a scope. My breathing is racing, and I have to settle it and focus before I have the courage to take off the safety.

I pull the trigger ever so gently. It gives the smallest pop and no kick back as the .22 calibre bullet exits the barrel.

After my first shot, I get in the zone, focusing on nothing but the sight and the sound of my own pulse. I hit my targets, even getting in some straight runs-my best 7 hits in a row.

Turns out I’m quite good at this, as we switch to paper targets where my shots group firmly around the inner circles-and I squarely hit a target at 100 yards out.

It’s actually quite cathartic and I contemplate adding becoming a sniper to my ever growing bucket list.

Shooting lesson over, and I head out I where I’m staying in West Hollywood, or ‘Weho’ as the locals call it.

I stop by Canter’s Deli for some beautiful Jewish fare, and gobble up chopped liver, gefilte fish and challah bread.

My apartment is just off Santa Monica Boulevard and not far from the famous Viper Rooms where River Phoenix died on a Halloween morning.

I power nap then head out with friends to Barney’s Beanery-an institution whose former patrons have included Judy Garland, Jim Morrison, and Janis Joplin.

It’s a grungy dive diner where we shoot pool, drink beers, and the playlist is licking me with Queens of the Stone Age and Depeche Mode.

We hang out until the early hours drinking, eating and laughing; and I retire after an amazing whirlwind day from one extreme side of Californian life to another.