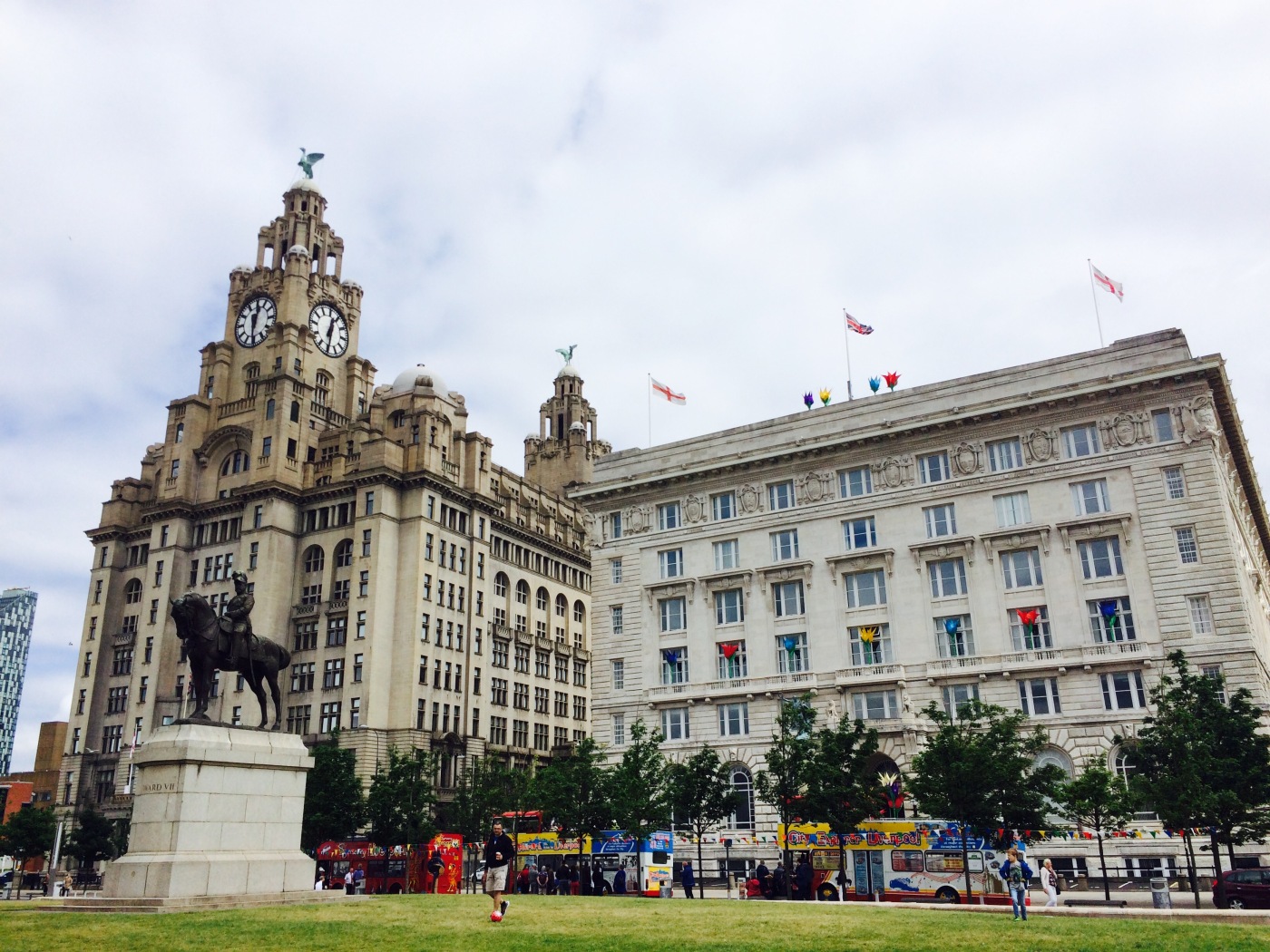 So today I’m up before 7 (and on a weekend no less) as I have an early morning summons to be detained at her majesty’s (passport office) pleasure.

I doze on the train from Manchester to Liverpool Lime Street, with no conversation to disrupt my slumber, seeing as it’s only me and the conductor inhabiting our carriage. I exit as the clocks strike 9, turning left off Lord Nelson Street, and stopping square in my tracks to awe and photograph the beautiful St George’s Hall. Following a 23 million pound refurbishment in 2007, it’s historic galleries, which were once home to civic and crown courts, now play host to all manner of exhibitions, tours and private events. It’s Neoclassical exterior stands dominating, back dropped by a clear blue sky, its edifice flanked by two regal stone lions, standing guard proudly as a Union Jack flutters lazily overhead (the football has got me all patriotic-don’t ask). It’s really something and I stay a good few minutes drinking it in before moving on reluctantly to the task at hand.

My phone has had some sort of melodramatic episode, so I’m sans Google maps for now (fuck everything), and after faffing around for five minutes and failing to get my bearings, I have to hop a cab in order to find my way, much to my chagrin. My cabby is a friendly fellow however, who calls me ‘kid’ in his heavy Liverpudlian accent, and even offers to charge my temperamental phone on our ride. Earning himself my immense gratitude and a sweet little tip to boot, he sets me down right in front of the passport offices, with clear instructions of where to enter.

I’m a touch early, but friendly, smiling security guard waves me in saying it’s ‘dead in ‘ere anyhow’ and to come on through no worries. I’m in there approximately ten seconds before my number is called, and I hand over my forms and photos, and, well, that’s it actually. I thought they might at least try to compare my face to the pics (I’m wearing a hat and shades today for maximum incognito effect, all I need now is a fake moustache), but nope. A little underwhelmed, I’m issued a receipt and with 4 hours to kill before I can collect, I’m off to explore and procure sustenance (code for ‘get me some coffee and eggs in my belly’).

The City is still waking up, the cool of the night still burning off the pavement, as I head down a deserted road, catching little pockets of sunlight here and there as I do. There’s no-one around and I feel greedy having this metropolis to myself, with plenty of time to stop and stare up at buildings without blocking passers-by on their way someplace. For a split-second it reminds me of my very first morning in NYC, except that the quiet then was due to a 6am rather than a 10am jaunt. I guess Liverpool likes to take it easy and sleep in a little. My kind of people.

I pass by several insanely talented buskers singing and strumming guitars as I wander on through the main shopping thoroughfare, a few idle patrons now milling around. As I browse the shops, retail assistants gift me with their names and offers of help that don’t feel obligatory, but instead truly sincere. I’m perfectly content meandering along and the only thing ruining this moment is the permeating smell of garbage hanging in the air from a refuse truck keeping pace with me, and no doubt carting off the remnants of last night’s debauchery from Liverpool’s many bars and clubs.

As I turn into Bold street, a lonely trumpet player is tooting the Black Adder theme tune outside the landmark Lyceum Post Office, which is currently decked out in historical banners. There’s thrift shops interspersed with quirky coffee houses, art stores and multicultural restaurants, taking me on a firm, swift, sweep around the globe. There also appears to be a shop completely devoted to beard maintenance, and I spot a few Shoreditch types lurking, in need of it’s services for sure. A Big Issue sellers bids me a warm ‘hello’ and so I smile and greet her back in kind.

On a recommendation, I stop into ‘Bold Street Coffee’, a joint that wouldn’t be out of place in the most painfully trendy parts of London, except you know, everyone’s Scouse. And friendlier. I sit a while and devour my gluten and dairy free porridge, in a curve ball move stepping away from my normal eggy fare. I sip delicious Kenyan roast filter coffee of which I consume about a pint’s worth, before leaving, somewhat caffeine-jittery, to mooch around some more.

On my return journey, what little sun appeared earlier has since vanished, and there’s a cool gust to the air. There’s more street performers out and about, and a further influx of Saturday shoppers, but it’s still not a patch on the heaving throng that is Manchester at the weekend. I quite prefer it. I still have an hour to kill, so I head down towards the river, voting to avoid the Albert Dock and stay towards Pier Head in the hope of retaining the quiet I’m enjoying. My bet pays off, and I am rewarded with stunning streets brimming with fabulous architecture. There’s buildings that could have stepped straight out of Bank or Monument, and street names such as Covent Garden, Drury Lane, Pall Mall and The Strand proffering me a misplaced sense of familiarity.

Underwater Street hunkers me down water front, the smell of salt and brine thankfully replacing the trashy notes of earlier. It’s still quiet and only a smattering of people are queuing for city bus tours and by signs that indeed promise a ferry across the Mersey. My vista starts left with the thoroughly modern Museum of Liverpool, and pans right to where my view becomes obscured by the Caribbean Princess cruise liner which is currently berthed by Princes Parade.

Behind me, The ‘Three Graces’, The Port of Liverpool, Cunard, and Royal Liver buildings are adorned with a St Paul-esque central dome, two huge Liver Bird statues atop two imposing clock towers, and giant colourful silken flowers respectively; really hitting home exactly why Liverpool was every bit deserving of its ‘Capital of Culture’ accolade in 2008. I head towards the river and a statue of The Beatles, the ‘Fab Four’ immortalised forever in Bronze, then loop right to the great ocean beast before me, before cutting back up onto The Strand, retracing my steps to Old Hall Street and back to the now, busier, passport office. Once inside, I collect my new documentation no bother, and smiley security man from earlier sends me off into the early afternoon with directions back to the station and wishing me a lovely weekend. Very lovely indeed.

I pick up the pace, aiming for a particular train before getting unceremoniously lost, as apparently you can’t walk through the Birkenhead Tunnel (not matter what Google maps tells me-the bloody liar). I bump into a helpful student who thankfully shows me the way, guiding me until I’m back at the bottom of St John’s Gardens and the familiar marker of St George’s.

I’m actually quite sad to be getting the train back to my neck of the woods, having been pleasantly surprised, for my sins, with what has turned a morning’s chore into a real pleasure. I realise it’s been a good 10 years or more since I stepped foot here, and it’s far more captivating than I remember. I gaze out the window somewhat wistfully, as the guard blows his whistle and my locomotive surges forward.

A mere hour later, we chug to a halt in Victoria, and I disembark to find gone is my sweet serenity, instead replaced with a loud, garish football crowd, and shoppers walking at a brisk pace and not a smile about them. With a sinking feeling, I am reminded that my home town is ever-inching that one step closer to London, where everyone is in danger of becoming just a little too busy, and-I might be imagining it-but a little less friendly.

As I’m jostled into the crowds, and have to duck and weave my way, I can’t help thinking that, perhaps, we could get by with a little help from our Liverpudlian friends, in order to make sure we keep hold of what is uniquely ours here in Manchester. Our passion, our culture, but also our fantastic laid back Northern charm, these are the very reasons why, actually, it’s really not that grim up North, despite what the Southerners doth say. With that sentiment in mind, and in a bid to retain my laissez-faire Liverpool vibes from the morning, I saunter off, half-speed into the afternoon, my thoughts full of smiles, rivers and buildings; the sweet notes of Sergeant Pepper resounding firmly in my brain.